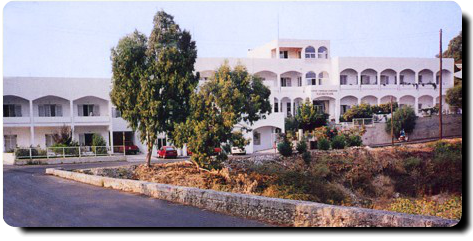 The establishment of the Nursing Home for the Aged was supported and implemented with donations of real estate or funds by a number of people: The offspring of George Kassimatis (Basil, Gregory, Anthony and Helen), Leon. Megalokonomos, Klir. Manolatos, M. Kitsogiannopoulos, Sofia Aroni, Sp. Souris, Kal. Kastrisios, Sofia Sarigianni, G. kastrisios, Bros. Panaretos, Mar. Mauropoulos, Froso Karydi, Stam. Zantiotis, Mina Mylonopoulou and many others. The construction works in Potamos Kythera started in1967 on a site donated by Kassimatis. The two story building finished in 1975 and it started operating from the August of the same year, originally with 12 inmates.

Our Kytherian compatriot George Sklavos, with his last will and testament of 12/7/1946, instructed his wife to transfer post-mortem to the Kytherian Brotherhood of Queensland the ½ undivided of his two consecutive real estate pieces Atlas and Star at the Queensland capital Brisbane (127 Adelaide Street), with the specific mandate to create a “Sanatorium” in Kythera with the proceeds of this real estate.

George Sklavos passed away in 1952 and the ½ undivided of the two consecutive buildings were indeed transferred to the Kytherian Brotherhood as Trustee for their management and the implementation of the Sklavos’ wish. This was the “Sklavos Bequest”. The relatives of the late George Sklavos challenged at the Australian court Sklavos’ last will requesting the repeal of the bequest, going as far as the Supreme Court of Australia in Sydney. The Australian Justice rejected the appeal of Sklavos relatives and saved the bequest in favour of Kythera. Since then, many years passed inactive, without The Kytherian Brotherhood proceeding to the execution of Sklavos’ will. Meanwhile, with the complete combating of tuberculosis, there was no more a need for a Sanatorium and neither for a hospital since already existed one.